I want to talk about an idea I’ve developed over the last five months of my study. I act as the Diaspora community manager, and being in this position has allowed me to see how a social network grows and changes. The decentralized, distributed nature of the project allowed for multiple community hubs to grow, and more importantly, different cultures emerged on different pods. How?

Looking at the amount of available hosts on podupti.me, you can see that there are about 65 active entries for pods of all kinds of different sizes and styles, give or take the occasional pod that shuts down. It’s important to note of two distinctions when we consider these pods: there is the pod’s own internal community, and there is also a standard network community of users that all share with each other the most (I, for example, have over 1500 contacts on Diaspora at the moment, with a majority of that number being active daily users across many different pods.)

When you join a pod, you come to come across the post popular content from it first. You’re bound to meet more people on your own pod at first, mainly because content is preferred there in order to introduce you to new people. There are options to follow popular pod-selected community members, and related posts are indexed through hashtags on a stream.

This is the scope that everybody you and your friends on your pod can see, and it is its own contained social community. Every single pod has one, and under my observations, I’d like to offer a statement about what’s happening between these communities.

Every single one of these pods is a community. A self-maintained community of users that have different general trending interests. Different pods have different memes, and different ideas about discourse and community. Out of these different pocket communities, they develop subpockets based on scopes of further related interests. In this way, original art and discourse can develop in a memetic sense. Community characters develop out of this, and friends grow together.

The network pocket overlaps the Host. Everything about your own community can be shared across other pods into a group deviation where everybody is already connected through their own respective pod’s connection.

Think of it like a growing constellation: the network is a cluster of different servers connected to one another, acting as one. This is the power of decentralization, as it allows for users to truly take their data into their own control, and choose who to connect to.

These different admins work together and talk to one another to maintain a consistent network, where these different pockets of culture can overlap simply through the resharing of content. It’s an hodge-podge of different perspectives, jokes, hopes, and ideas.

The network is open for anyone to build on and connect to, and people can talk to the network as a whole with relative ease.

“Decentralized social communities that communicate together allow for an opportunity to blur the line between their pod’s own distinctive cultures and subcultures, and the network’s own observations as a whole.”

Boiled down, it can be interpreted as:

“Social pockets exist in different web communities, and the users in their cultures can intermingle with one another by sharing their own experiences and things they enjoy. These lead to the creation of new subcultures and distinct communities in their own right.”

Plain English: people can now build social networking sites of their own using open source software, and each site can communicate with one another pretty seamlessly as if they were part of the same website. These websites can get lots of different people, and these people develop into their own community-run gambit of cultures and ideas.

With decentralization, though, the best ideas a community can provide overlaps. Let’s give an example with a little renaming. Think about it: What if you could set up your own Tumblr and talk to someone on Posterous, with the ability to message each other and follow each other?

Now, let’s say you can do that with any site you want. You can make it look how you want, and everything on it can be yours. Imagine having these different sites with different fandoms and memes and news links, all sharing with one another to overlap different groups of people in different ways.

Ideas can be spread across multiple communities this way, especially if we can assume that creative groups of people tend to hang out and check out each other on social networks regularly. (DeviantArt, Tumblr, Can.vas, Flickr, are all great examples of fairly vibrant user communities, and fit to be comparable to Diaspora and other decentralized social networks.)

I think there’s a lot of merit in trying to figure out how best to make these different sites talk to one another.

20 hours ago Captain, it's Wednesday
What a week, huh? 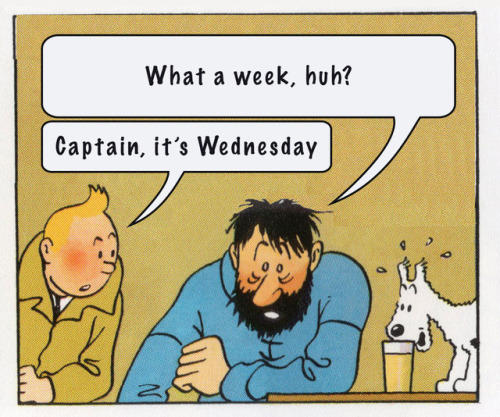 1 day ago Airman Tilley
Working in customer service would be so much better if were acceptable for the service worker to be profoundly rude towards the customer.

I think about that restaurant where your waiter insults you all night long in clever ways, and how many people love it as a type of hilarious and novel situation.

If that were my job, I'd probably love it.
1 day ago Airman Tilley
"Excuse me, sir, where did you get that sick jacket?"

Me: well, there's a destination, a little up the road, from the habitations and the towns we know, a place we saw the lights turn low, the jigsaw jazz and the get-fresh flow, pulling out jives and jamboree handouts, two turntables and a microphone.